Sometimes it might feel that not much is being accomplished, but my notes show that is not the case!

In the afternoon on Tuesday, October 16th, a 75 ton steam locomotive will be unloaded in Kelley Park for eventual inclusion in a railroad museum proposed near downtown San Jose. Built in 1913 and now owned by the non profit California Trolley and Railroad Corporation (CTRC), locomotive 1215 had operated for the Southern Pacific Railroad.

Locomotive 1215 is representative of the many small steam engines necessary to move freight between food processing industries that once dominated San Jose’s economy and landscape. Benefiting from market access provided by railroads, the Santa Clara Valley was recognized from 1920 to 1960 as the largest food processing region in the world. Image

The locomotive will be stored at the San Jose Historical Museum adjacent to CTRC’s trolley barn. This location will enable CTRC to begin a cosmetic restoration of this historic artifact. CTRC volunteers are currently restoring a second and larger Southern Pacific steam locomotive at the Santa Clara County Fairgrounds. Both locomotives will be relocated in the future to the proposed San Jose Railroad Museum Park.

Proposed for a vacant parcel near downtown alongside the Guadalupe River Park trail, the San Jose Railroad Museum Park will feature restored railroad equipment, relocated city designated landmarks and replicated historic buildings from our community. Supplemented by educational exhibits, the facility will celebrate the railroad’s roles in San Jose’s agricultural and food processing heritage. CTRC is actively enlisting the fiscal and political support to protect the property and eventually fund the project.

Formed in 1982 as a 501(c)(3) not for profit organization, the California Trolley and Railroad Corporation has a mission of preserving and reflecting the rich legacy of rail transportation in the Santa Clara Valley for the educational and recreational benefit of present and future generations. The organization has restored nine historic trolley cars, four of which operate for the Valley Transportation Agency’s transit mall in downtown San Jose. The remaining trolleys operate for History San Jose’s school aged educational programming at the historical museum in Kelley Park. 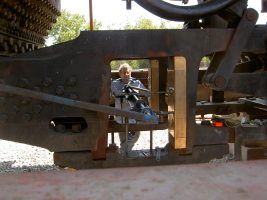 Wire brushing and painting of the boiler continues around the firebox.

Ford forklift parts were organized and stacked on pallets. 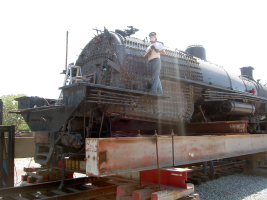 The planning section will discuss the move of 1215.

Shoes and wedges were remeasured to double check size before final machining.

Prep work for sealing two rigid stays is in process.

The original boiler jacket is being laid out on the ground to determine location on the boiler so drawings can be made.

Ford fork lift is being drained of fluids.

Chain saw was cleaned and tested â This will be used to cut the cribbing for the locomotive.

Completed weld repairs to locomotive's brake foundation. Cleaning and painting of boiler continues. Tram wires have been strung to allow further measurements with shoes and wedges in place.

Repairs to the Clark forklift are complete. Several minor mechanical issues have been addressed. Weed cutting in roundhouse and rail storage area.

Repairs to the Clark forklift have been completed. The water pump has been rebuilt and installed. A new seat was acquired, mounting hardware machined and attached. It has been a number of years since this valuable asset has been fully functional.

The organization's four 35 ton air jacks have been cleaned, lubricated and tested. These will be used in the near future to lift the locomotive so that the crib supporting the large steel beams which the locomotive rests upon can be replaced. The present crib is deteriorating.

Cleaning and painting of the locomotive boiler continues.

Documenting the locomotive's jacket is in process. All of the various jacket pieces have been laid out and measurements taken. This is the first step in construction of a new jacket.

On May 6, a 21 page document describing the San Jose Steam Railroad Museum Park was presented to the San Jose City Council. 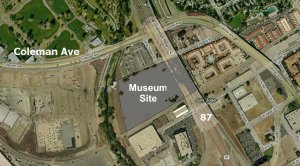 Click here to see a revised configuration (pdf format) for the Coleman/Highway 87 site.

You can click on the small aerial photo to get a more detailed image.

For more photos and models click here to go to the photo gallery.

Members of the CTRC leadership have been briefing city agencies and San Jose City Council on conceptual plans for the San Jose Steam Railroad Museum Park.

The location is a vacant privately owned parcel near downtown alongside the Guadalupe River Park trail. Plans are underway to enlist the fiscal and political support to protect the property and eventually fund the project. Toward this effort, CTRC has created documents, presentations and a model to share within the community.

Shoe and wedge for driver L2 was test fitted and measurements taken. Tram wires must now be installed before finally machine work on shoes can take place. Three of the six journal box to spring saddles have been machined to final length.

Reorganization of various materials at the restoration site continues. Parts for the lawn tractor have finally been received. The tractor was assembled this past weekend and returned to service.

Today the last of the staybolt sleeves were welded to the boiler of 2479. In a very hot sun, John Blaine completed attaching 3 half sleeves and one full sleeve.

Its been a long road. There is still so very much remaining.

During this past week the crack located at the top of the frame cross member behind number 2 driver was welded.

The shoe and wedge for the fireman's side of number 2 driver were positioned and tested for fit. Excessive side to side rock was noted for the shoe. The pedestal face plate was found to have several high spots. These high spots were removed by light polishing of the surface on Saturday. The shoe and wedge may now be tested again for fit.

Chamfering of staybolts in side the fire box continues.

Gouging out of a crack in the cross member in front of number 1 driver was completed. This cross member is part of the locomotive's brake foundation. There are at least three significant cracks in this part.

The lawn tractor is out of service for parts. Cutting of grass was accomplished with hand pushed power mowers.

The pedestal crack was discovered during repairs to the four face plates of the number 2 driver pedestals. Each face plate's attaching welds had cracked nearly all the way around. During the weld repairs to these plates, the shoe face plate on the left side twisted away from the frame and required a new plate be machined and installed. This was the second major welding task completed this week.

With the repairs completed to the left side of the frame for number two driver, the shoe and wedge for the left pedestal can be installed and measured to ensure their faces are parallel. If not, the necessary machining will be completed. Once this task has been completed, all shoes will be installed and a final tram measurements will be performed. Also started this week was the chamfering of the telltale holes for all new staybolts. Chamfering of these holes is necessary to hold a sealing material that blocks soot and other debris from blocking these holes during operation. During side sheet, throat and combustion chamber repairs, close to 1000 staybolts were replaced. Each of these bolts must be chamfered.

Started this week was machining of the saddles that interface the locomotive springs to the driver's journal boxes. This critical step sets the height of the locomotive and more important can determine the weight each journal carries. Errors here can cause journals to over heat.

Finally comes grass cutting. The task this week was not as easy as in past weeks. Our lawn tractor is presently not operational. Parts are on back order and may not be available until mid-May. With site appearance degrading, several workers (J. Zielinski, L. Murchinson, P. Ruhle) broke out the hand push mowers. They cut a lot of grass during the work day.

Its been a real good week.

This brings to a close the replacement of the near 180 staybolts that began over three years ago. These bolts were removed from the throat sheet, combustion chamber, and side sheets as they were not drilled up into the head. Two rigid and one flexible stay are still to be installed. The two rigid were removed late last year to allow pad welding on a small area of the fireman's side sheet. The flexible still requires installation of its sleeve. Other work:

The Visitors From Jack Young:

The story unfolds this way ... I received an email from Robert Franzen the first of the year letting me know he was going to be in town the weekend of January 13, 2007 for a Private car convention at the Double Tree hotel in San Jose, and could I pick him up and bring him to the site to visit the SP 2479 restoration to see the restoration crew to catch up on the project. 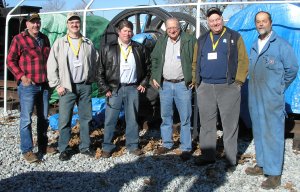 So I replied to Roberts email letting him knows that we would welcome a visit to the site.

Friday January 12, 2007 I called Robert to arrange a time to pick him up at the Double Tree Hotel we were all set for 9:30 AM the following day.

I get to the Hotel and out comes Robert Franzen and his 3 Friends Doyle McCormick of 4449, Steve Sandburg of 261 and Nick Kallas of Illinois railroad museum.

So I have pretty much had the brain trust for Big Operating Steam in my Bronco heading to the Restoration site of SP 2479.

As we head to the site (on Highway 87) I had the opportunity to point out some points of interest VTA maintenance Facility where we had SP 2479â's Tender, lead truck and trailing truck wheels turned and the new maintenance Facility for CalTrains and, of course, the status of the SP 2479.

We arrive at the restoration site for SP 2479 with work in process on the locomotive. The crew took a break to get introduced to our visitors. We then conduct a walking tour of the Locomotive (inside and out) and the facility.

They seemed to be impressed by what they saw and the completeness of the restoration. Our visitors stayed for little more then 1 hour and then it was off to the History Museum of San Jose for another walking tour of the grounds. I then returned these folks back to the Double tree so they could attend their conference.

All in all a very interesting day.