The Santa Clara Valley Railroad Association (SCVRRA) was created in 1981 and identified by the state of California and the IRS as an educational not-for-profit organization with the sole purpose of restoring locomotive 2479 to operating condition for the benefit of future organizations. The locomotive had been on displayed at the county fairgrounds since 1958. This interest to consider the restoration of the many "park locomotives" around the country was fueled by the 1976 Bicentennial event that showcased several steam locomotives restored specifically to pull the Freedom Train around the country. The next couple of years were spent establishing a contractual relationship with Santa Clara County that identified SCVRRA as the prime contractor on the restoration project (with no dollars and little support attached). The actual contract was signed in 1986.

Also in 1986, the Asbestos Abatement Act has been passed by the state legislature. Since the boiler of 2479 was lagged with asbestos, a licensed contractor had to be identified and hired to remove the material in the prescribed manner. By 1989, the county was able to provide the $25,000 needed to accomplish this task, a contractor was hired, and the asbestos removed. From 1986 to 1989, the volunteer group spent several thousand hours preparing the locomotive for the asbestos removal.

With the asbestos gone, the volunteers were prepared to begin the serious effort of restoring locomotive 2479 to operating condition. The 1989 Loma Prieta earthquake provided a brief setback. One of the rails on which the locomotive had sat since 1963 rolled over and threatened to dump the locomotive on the ground. The organization appealed to the Southern Pacific Railroad who, in turn, donated four sections of new "panel track" for installation behind the locomotive. Several hundred hours of volunteer effort were expended in laying and ballasting the track and preparing the locomotive for movement onto the newly laid track sections. The movement was made in December of 1990. 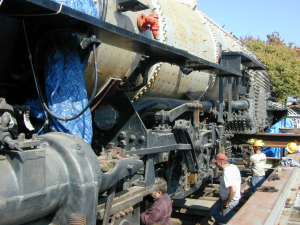 Since 1989, the volunteers of the Santa Clara Valley Railroad Association have averaged over 5,000 hours per year on the locomotive restoration project. This amounts to approximately twenty-five person years expended. This time represents time spent directly on the locomotive and does not include the many hours spent attempting to raise funds, recruit and train volunteers, and do the administrative tasks that are required of any organization whether for profit or not.

At the end of 1994, the SCVRRA merged with the San Jose Trolley Corporation to form the California Trolley and Railroad Corporation, a not-for-profit educational organization with the mission to preserve historic rail equipment of importance to the history of the Santa Clara Valley and to provide and interpretive venue. One of the underlying reasons for the merger was that the new organization could be a more effective fund raising vehicle.

To date, the principal source of funding for the locomotive restoration has been the Santa Clara County Historical Heritage Commission and volunteer fund raising efforts over the years. Approximately, $350,000 has been raised to date). Of this amount $230,000 represents the cost of the boiler repair done by a professional boiler contractor as required by federal and state law. The work on the boiler was begun by Manley Boiler Repair in May 1998.