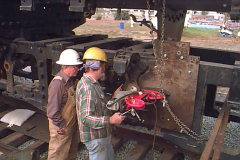 Steam locomotives are best thought of as a collection of sub-systems, and at any time each of these disparate systems may be at a different stage in its life-cycle. The firebox, tubes, superheater, boiler sheets, reciprocating gear, foundation rigging, brake rigging, tank, appliances, and other parts all wear at different rates, and it is seldom economic to return all these parts to a zero-miles condition at the same time. For an engine that will see limited use as a museum demonstration or occasional excursion, it makes sense to wait until all the remaining life in a part is used up before renewing it, so long as wear limits are not exceeded and safety is not compromised. Only if an engine is to be subjected to heavy, continuous use does it make sense to restore every system at once. 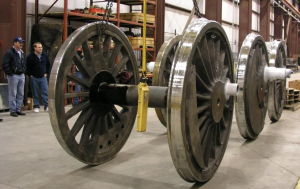 This is how the railroads did it, grouping repairs into different classifications of overhauls. But in the last days of steam, engines were occasionally run into the ground without regard for limits and standards. Sometimes the companies did succeed in wearing everything out at once, as we have discovered during our restoration of Locomotive 2479.

During our initial evaluations of locomotive 2479, it was believed that enough useful life remained in its major components to permit a limited restoration. As we disassembled the various sub systems however, we discovered that nearly all required some level of reconditioning or out right replacement. A limited restoration would not enable potential return to operation on the San Jose-San Francisco rail corridor.

Using donated labor and timely pro bono services, the organization has performed a major overhaul of a 250 ton steam locomotive in a open air parking lot. Of the remaining tasks, driver and running gear repair work are the major hurdles. Unfortunately, these tasks are beyond the capacity of our existing donar base thereby require outsourcing away from our Santa Clara County fairgrounds location.