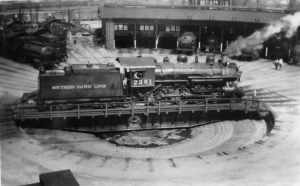 The fifteen stall Lenzen Roundhouse was originally built in 1899 to serve the standard gauge San Jose-San Francisco rail commuter line and the narrow gauge South Pacific Coast Railroad replacing two existing structures for those lines. The South Pacific Coast operated from Alameda, down the East Bay marshlands to San Jose than over the mountains above Los Gatos on the way to Santa Cruz. Although the two railroads operated independently, both were early segments of Southern Pacific Railroad ownership. This roundhouse is unique because it was one of the few such structures built to serve two different gauged locomotives. (Gauge is the distance between the rail heads, i.e. narrow gauge 36" and standard gauge 56.5".) The narrow gauge line was converted to standard gauge by 1909.

The Lenzen facility would hold importance to local railroad operations for the next fifty years. During this time, steam locomotives assigned to the Roundhouse supported the commuter operation and the freight transportation requirements of the community's food processing industry.

During the steam era a large number of employees worked out of the San Jose Roundhouse. In addition to locomotive engineers and firemen reporting for commute trains, switchers and local freights, a large number of boiler makers, machinists, laborers, herders and hostlers all worked under the direction of a roundhouse foreman. Many of the engine crews and roundhouse workers lived nearby in the area around Stockton Avenue and the railroad tracks which were within ear shot of the steam whistles and an easy walk to work at the roundhouse. The roundhouse force worked 24-hours a day servicing the large number of steam locomotives assigned to San Jose.

After the second World War, many railroads including Southern Pacific, began purchasing new diesel powered locomotives to replace aging steam locomotives. A major factor toward this decision was reduced maintenance labor requirements of diesel locomotives. Subsequently, many locomotive facilities were either reduced in size or eliminated. In 1959, the Lenzen Roundhouse was reduced from fifteen stalls to a six stall configuration as the facility remained a necessity to support diesel locomotives used in both commute and freight service.

As local food processing customers left the region, the number of diesel locomotives serviced at the San Jose Roundhouse were reduced. In addition, the railroad change its operating divisions as trains that once changed crews and locomotives in San Jose, began to literally pass thru, thereby reducing the number of locomotives maintained at the Lenzen facility. Despite these changes, the San Jose Roundhouse remained an integral component of local rail operation.

Although the peninsula commute line was purchased by the local Joint Powers Agency in 1982, the Lenzen facility continued to service locomotives. Because of un-reinforced masonry codes enacted after the 1989 Loma Prieta earthquake, the roundhouse structure was determined to be unsafe and scheduled for demolition. The remaining locomotive servicing was moved to nearby locations.

Preservation of the structure thereby became the focus of California Trolley and Railroad Corporation and other local interests. Recognizing the importance of this historic structure to its community, the Southern Pacific Railroad donated the building and turntable to Santa Clara County in 1994 for inclusion in a railroad museum. In 2000, the roundhouse was disassembled, palletized and moved to the county fairgrounds.