History San Jose Presents The Way to San Jose, A Celebration of the Valley's Transportation History

Commuters and non-commuters alike will have the opportunity to view transportation through the ages. Thanks to the Rotary Club of San Jose and History San Jose (HSJ), CalTrain will unveil the Valley's transportation history exhibit at the San Jose Diridon Station on Tuesday, October 19 from 12:15 to 1:15 p.m. The public is welcome.

Click here for the full details, invitation, and press release.

The Way to San Jose celebrates nearly 100 years of Rotary in San Jose with a focus on transportation in Santa Clara Valley -- from the Native Americans to the new expansion of the San Jose Airport and to the BART and high speed rail systems of the future. The museum, a concept of immediate past Rotary president Rod Diridon, Sr., was funded by the Rotary Club of San Jose and implemented by History San Jose supported by the California Trolley and Railroad Corporation, and the Mineta Transportation Institute.

The Way to San Jose exhibit includes transportation-related historic photographs and artifacts. Presented will be graphic mementos depicting the Native Americans' foot travel and canoe to the Spanish Californio and early American settlers' horseback and covered wagon migrations, through the early trolley and railroad periods to the current highway and airports including the emerging modern rail systems. 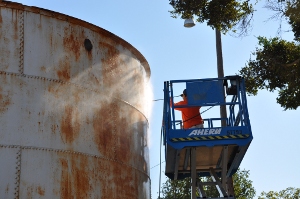 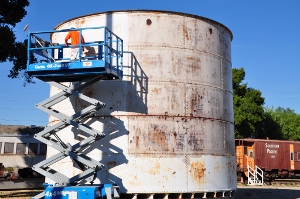 Painter, Nick, spent a morning applying a rust inhibitor by roller. The painting supervisor felt that use of a roller allows for a heavy application of the inhibitor.

It's a bit difficult to see in the image where the inhibitor has been applied. The area to the right of the scissor lift has been finished, except for the lower panel, and is a slightly darker color then the rest of the tank.

Until today, none of us had seen the tank's inside. (See the photos below.) A high reaching scissor lift and the painter provided an opportunity to peak inside.

I believe the bracing was inserted for the move from Lenzen St. to the fairgrounds.

Update (Oct 6): Apparently the supervisor for the water tank painting project did not like the finish. Today a worker was seen sanding the tank. 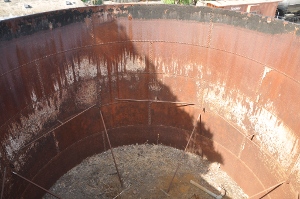 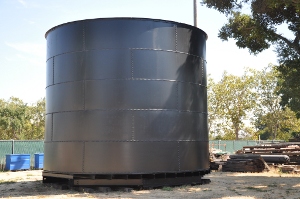 The Tuesday crew is close to wrapping up the stabilization and cleanup of locomotive SP1215. The task began in May of last year. I had hoped the job would be complete today, but a hand full of small tasks remain.

For those that do not remember what this thing looked, below is an image taken upon arrival of the locomotive, October 2007. 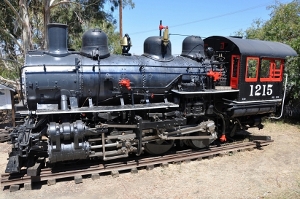 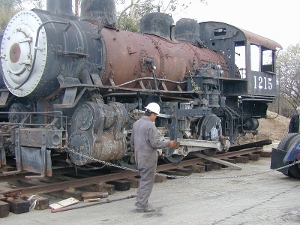 Last component in the locomotive's front coupler pocket has been installed. With the help of liquid nitrogen, donated by Todd from the Schmahl Science Workshop located at San Jose History Park, the upper hole's bushing was slipped into place on March 29th and the coupler installed. Another task, many years in planning and work, is complete. Thank you Todd!

Various components that make up the locomotive's valve gear are now being closely examined. Link support pin bushings have been removed on both sides. The right side bushing holes in the yoke were found to be round. Bushings have been machined and pressed into place. Things are not so good on the left side. The inside hole in the yoke was found to be out of round. Tooling is being made to bore this hole with a magnetic base drill.

Electrical outlets are now in service near the tender, caboose and passenger cars. Approximately 150 feet of cable and conduit was laid for this improvement. Much needed lighting in at least one of the passenger cars is now available. Thank you A Tool Shed and Robert Pederson for the use of a ditch witch!

Late in the month John Zielinski was informed by Siemen's management that a 5 foot square 6 inch thick acorn platen table would be donated to CTRC. Arrangements were being made for pick up of this needed item.

The final piece of good news for the month was Oakland Machine had finished boring the main and front set of side rods. The rods will be picked up early this coming week. SP1215

The last segments of the Fireman's cab floor has been cut and set into place. Most of the necessary welding is complete. Holes have been located and drilled in the floor for that side's air tank. All back head pipe, removed for asbestos abatement, has been put back into place.

The trolleys are now operational following an extensive effort to repair damage from a rare lightening strike on January 19th.

Despite the many rainy days during the month, there has been progress on both locomotives and improvements at the fairgrounds restoration site.

An evaluation of 2479's valve linkage is complete. Several of the system's bronze bushings must be replaced, several pins require truing, the link blocks must be built up with braze and valve rod crosshead needs babiting. The main and front set of side rods are at Oakland Machine Works for boring of the main pin holes and work should be completed soon.

Access to materials stored in both passenger cars has been improved. Stairs were constructed from excess steel and boiler tubes removed from 2479.

On January 19 the area in and around History San Jose took a number of lightning strikes that include the Power Substation.

PG&E repaired their damage quickly and confirmed that we have 480 VAC to the substation.

After two visits from Cupertino Electric (pro bono), we have identified and repaired several blown components.

The next item that is suspect is a âType 76 DC Overcurrentâ. It has been returned to the manufacturer for repair. Expected return will not be known until they test it on 2/8 (or so).

The area we are focusing on is the controls, which are not well protected from incoming AC problems.

The substation was installed in 1987.

Challenging us is the fact that most electricians have limited skill in the area of DC controls.

Some Historic Transportation Experience (HTE) classes are being held without the trolley operating, but until we have power, that is the best we can do. The present outlook for return of service is early March and that is just a guess at this time.

There has been some progress on 2479 the past several months. All components of the valve gear have been removed from the locomotive and a close inspection of these components is under way. A bushing was removed from the front coupler. Measurements indicated that the coupler's pin hole had to be bored before a new bushing could be inserted. Boring of the coupler is complete, and a bushing has been machined. A new front coupler pin has also been machined.

All bushings in the main and side rods have been removed. Measurements showed that the bore's were round but the bore's for the main driver pin in the main and front side rods have significant pitting. Boring of these holes is necessary but is outside of our machining capabilities. Oakland Machine Works has been contacted and has agreed to perform this work. The rods will be delivered to Oakland Machine Works this coming week.

Weather has also slowed work on 1215. Painting of the tender was completed only days before the season's first rain. A few parts have been returned to the locomotive but inclement weather has stopped additional work. Parts are still being cleaned, painted and stored until weather improves. The severely corroded cab floor on the fireman's side of the locomotive has been cut out. The first replacement section has been cut and fitted, but again poor weather has prevented further progress.

Because of their importance to San Jose's industrial heritage, both the roundhouse and turntable had been previously designated city historical landmarks.

Plans are underway to enlist the fiscal and political support to protect the property and eventually fund the project.

Click here to read the museum proposal. (note, it is a 5Mbyte, file that could take a few moments to download.)